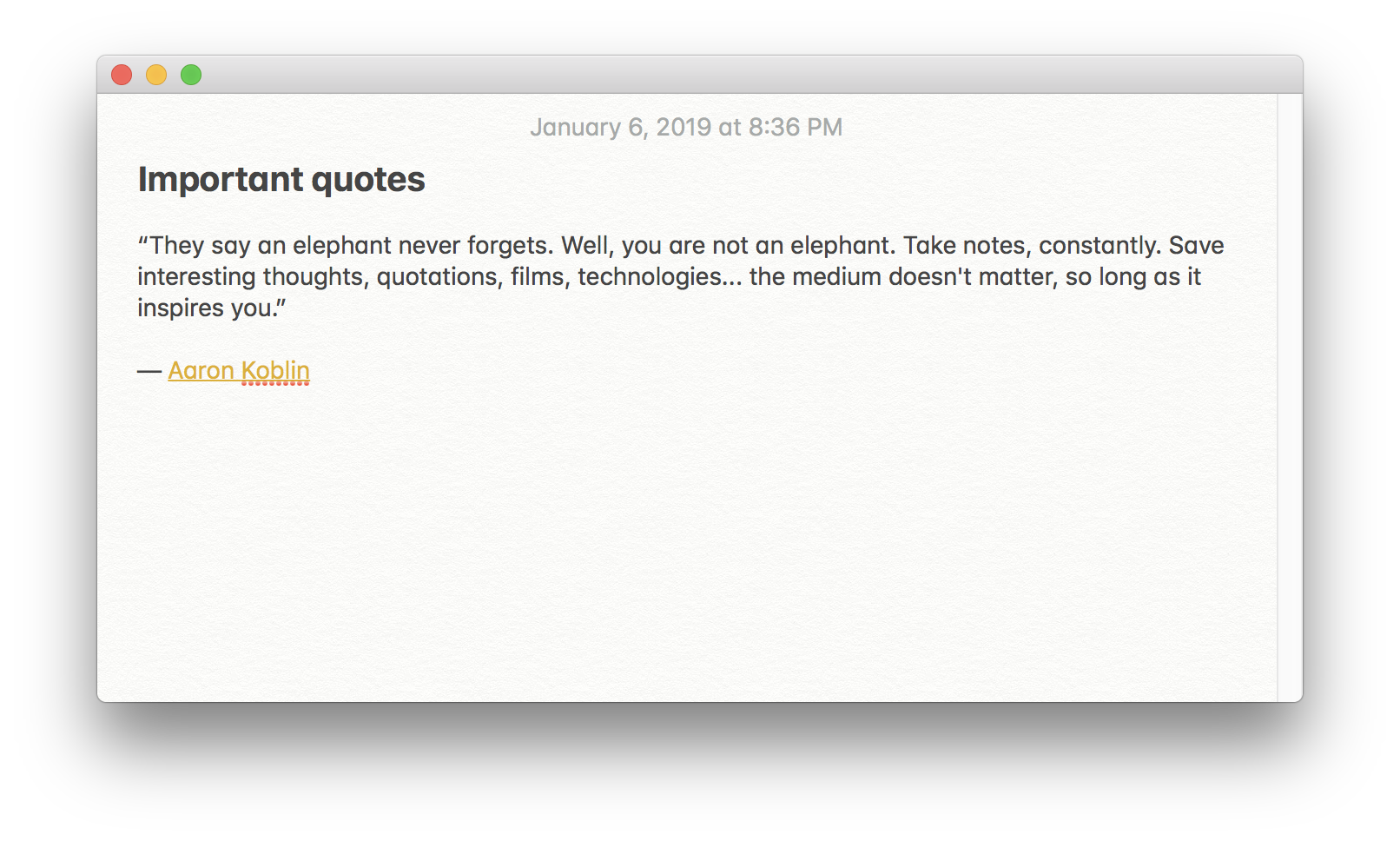 I find the ability to write and search notes anywhere one of the most beneficial uses of my iPhone. However, I’ve had trouble finding an app I’m happy with. The more notes you write, the longer it takes to switch between apps, so I want to make sure I make the correct choice.

After extensively using Apple Notes, Bear, OneNote, and Ulysses, I’ve developed the following criteria to help guide my decision. I selected these 4 apps primarily because I am at least somewhat confident they won’t shut down in the near-term. There are very enticing note-taking apps from newer/smaller companies out there (see: Notion, Agenda), but I don’t want a painful migration to a different service if they shut down in a few years.

This is intentionally focused on Mac and iOS. If you are cross-platform, stop reading here: OneNote is the obvious choice, with Evernote coming in a distant second due to business instability (more on that below).

Bear was almost my choice. It ticks all the “critical” boxes, but it can’t search PDFs and doesn’t have most of the “nice to haves”.

Ulysses was disqualified due to the poor support for embedded images and other attachments. Because it’s primarily a writing app, rather than a note-taking app, I don’t expect this support to improve substantially anytime soon. If it does, Ulysses is definitely worth another look.

OneNote has a few unique features that help push it over the line for me:

Other apps of interest

I’ve only included applications that I think are viable long-term (>5 years from now), but there are some newer apps that may be options in the future if they stick around. Some of these are designed for teams, but could certainly be used by a single person.

Standard Notes is an interesting application that is possibly worth a look. It’s been around since 2016 and has a strong take on security and longevity. I have not personally tested it out, however.

There are also some “Linuxy” applications for note-taking:

I’m not interested in these because they don’t fit the aesthetic I’m looking for, and this matters for a tool I’m using every day.

The New York Times has some open source software called library, which provides a shared knowledge base using Google Docs as the back-end for editing content. This is a pretty cool idea that would work well for shared notes.

See “Evernote’s new privacy policy allows employees to read your notes” (2016). They backtracked on this, but trust was lost.

See also “Evernote lost its CTO, CFO, CPO and HR head in the last month as it eyes another fundraise” (2018).

Because of this, Evernote does not seem viable long-term.

🌟 Was this page helpful?

Please let me know with this quick, 3 question survey.